Would you like to learn more about the history of the Big Ben? Continue reading! 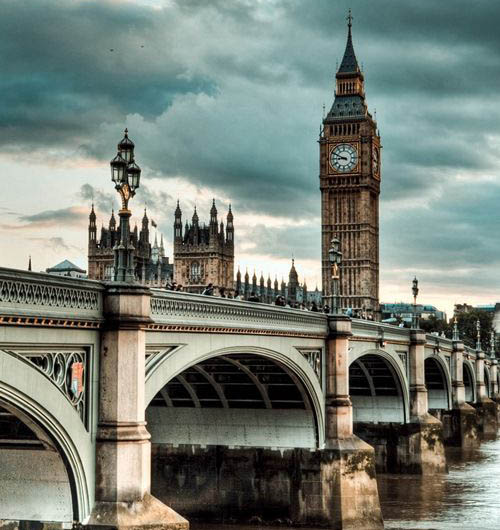 The construction began on Big Ben, located in the Palace of Westminster, in 1843 and the works did not finish until 1858. When we talk about Big Ben we are talking about the clock tower; however, the name originally referred to the 14-ton bell inside the machinery.

They say that the name is a tribute to Sir Ben-jamin Hall, a civil engineer who coordinated the rebuilding of the Parliament. However, it is also thought that it could have been chosen in honour of boxer Benjamin Caunt, nicknamed “Big Ben”. The clock was designed by the lawyer Ed-mund Beckett and by George Biddell Airy, the royal astronomer. The construction was entrusted to clockmaker Edward John Dent.

During World War I (beginning in 1916 and over two years), the clock’s bells were silen-ced and the tower stopped being illuminated at night to prevent it from being attacked by the Nazis. The monument has already shifted 43 cm. No-netheless, it will be another 4,000 years until it resembles the Tower of Pisa.

The base of each clock face contains the following inscription: Domine salvam fac regi-nam nostra Victoriam Primam, which means “O Lord, keep safe our Queen Victoria the First”.The clock has always been punctual; it even withstood the Blitz during World War II. Never-theless, the British can never forget that New Year’s Eve of 1962 when they entered the New Year 10 minutes late.

On 26 June 2012, in honour of the Diamond Jubilee of Queen Elizabeth II, it was decided that the tower would be named Elizabeth Tower. According to a survey by Metro.co.uk, the Clock Tower was voted the most iconic film location of London.