Eight places to enjoy your stay in London like never before

Eight places to enjoy your stay in London like never before

It is impossible to define it in one single word, as there are countless places in London that make it a unique city. The English capital has something different to offer: its attractions, urban parks, nightlife or simply its atmosphere. With a unique personality, it sets itself apart from others for being a historic city and a leader in fashion trends, art and gastronomy.

London is one of the most visited cities in the world thanks to its urban and cosmopolitan character. This highly unique city is home to countless curiosities and has lots to offer. It is for this reason that we advise you not to miss the 8 most incredible places in London. Let’s go!

LONDON, THE CITY OF A THOUSAND FACES

London is, without doubt, a wonderful city to visit at any time of the year. It presents lots of cultural diversity, seen in its people, its streets and its neighbourhoods. With more than 8 million inhabitants, 270 different nationalities and 300 languages spoken, the English capital has become one of the most cosmopolitan urban centres in the world. Its character transports us to different places across the globe and when visiting it, you too become part of the constant hubbub to be found on its avenues. 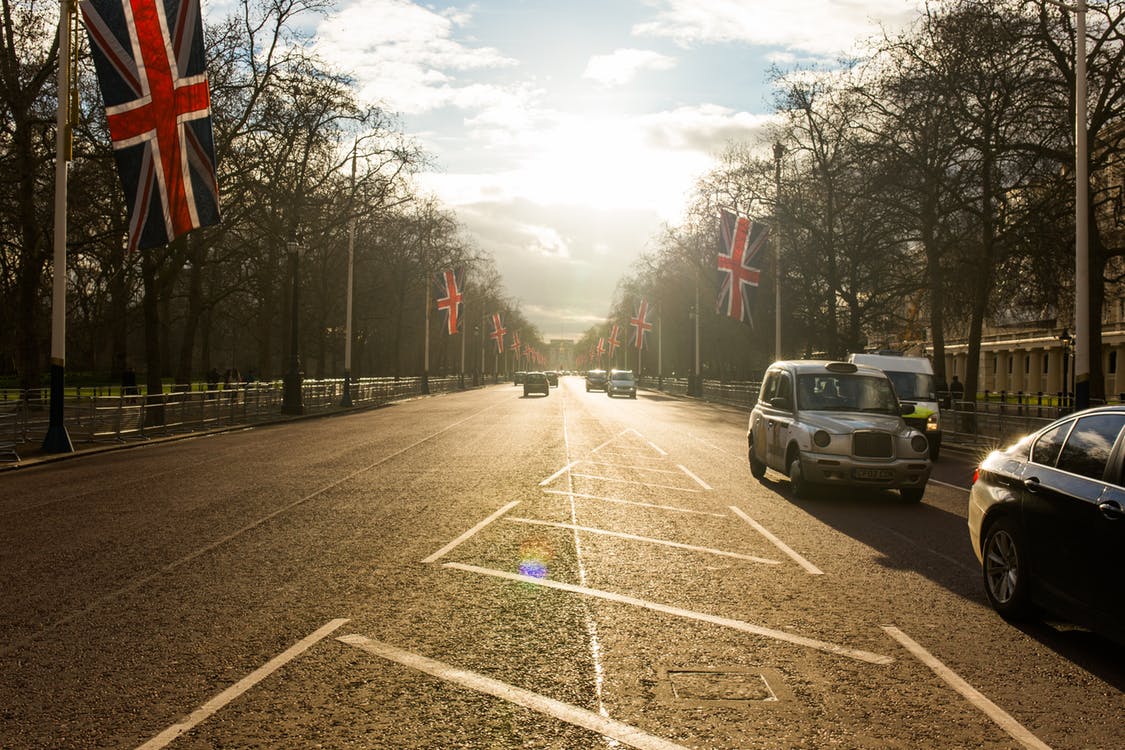 EIGHT PLACES IN LONDON NOT TO BE MISSED

One of the most iconic images of London is the River Thames which, flowing right through the whole city, divides it in two and adds personality to each of its districts.  Let us allow London to guide us through its streets and avenues and lose ourselves as we discover it. Below we suggest the eight places in London you must not miss when you visit this wonderful city.

1. The symbol of London

Visit the most famous clock in the world. At more than 96 metres high and built in 1858 next to the Palace of Westminster, the tower that houses Big Ben is one of the main symbols of the city.

In Victorian Gothic style, the tower has a clock on each of its four sides. An interesting activity for visitors is to check the accuracy of its renowned punctuality. It is a well-known fact that after the bombing that took place in London during the Second World War the clock’s performance was unaffected. 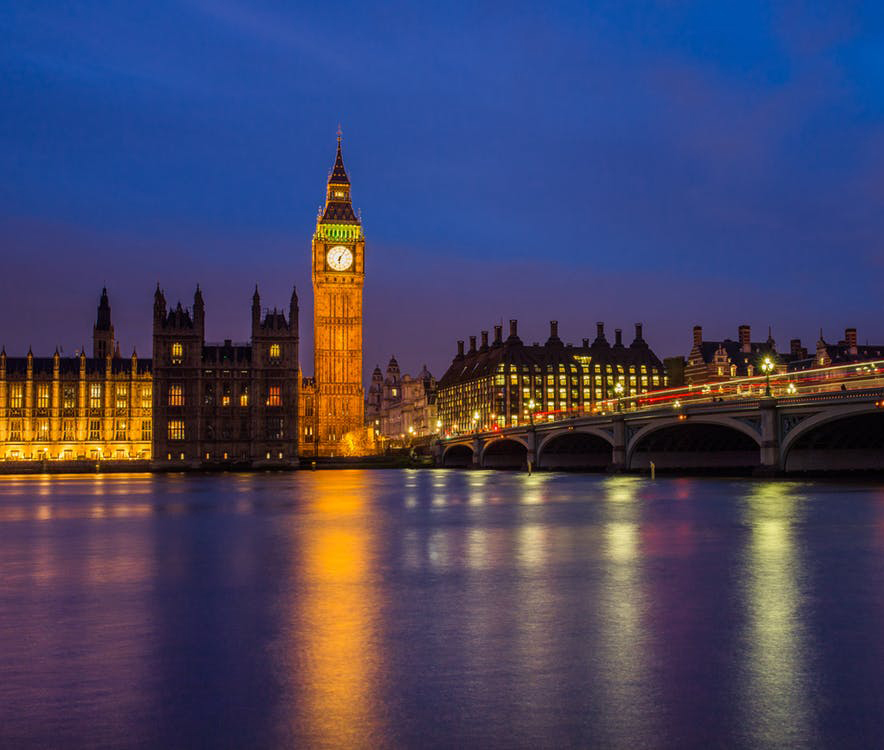 2. London from on high

An obligatory stop is the London Eye. Despite being one of the newest tourist attractions, it has already become one of the most popular places in London .

Located on the banks of the Thames, it is a giant wheel, 135 metres high, comprising 32 glazed capsules offering authentic 360-degree views of London and its environs. 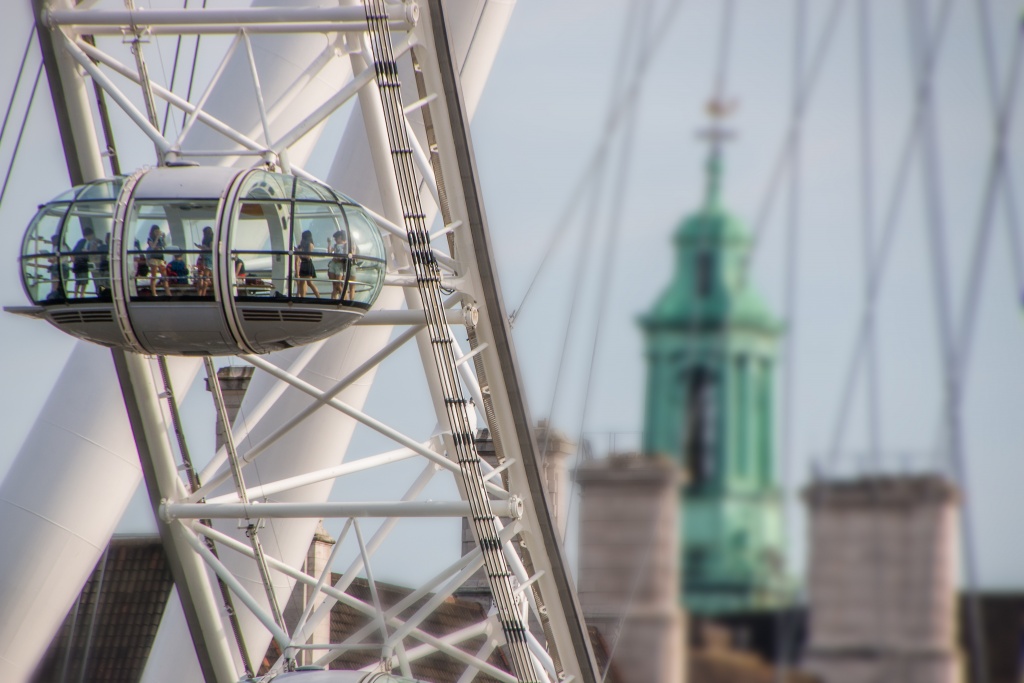 3. The British Royal Palace and the Changing of the Guard

Residence of the British Royal Family since 1837, Buckingham Palace is an important building, amongst other reasons for housing one of the largest collections belonging to the British Crown.

Outside the palace, from the great iron gates that lead to St. James’s Park, every morning thousands of tourists watch one of the biggest tourist attractions: the Changing of the Guard. Don’t miss the famous guards crowned with their black bearskin hats marching to the rhythm of the regimental band. 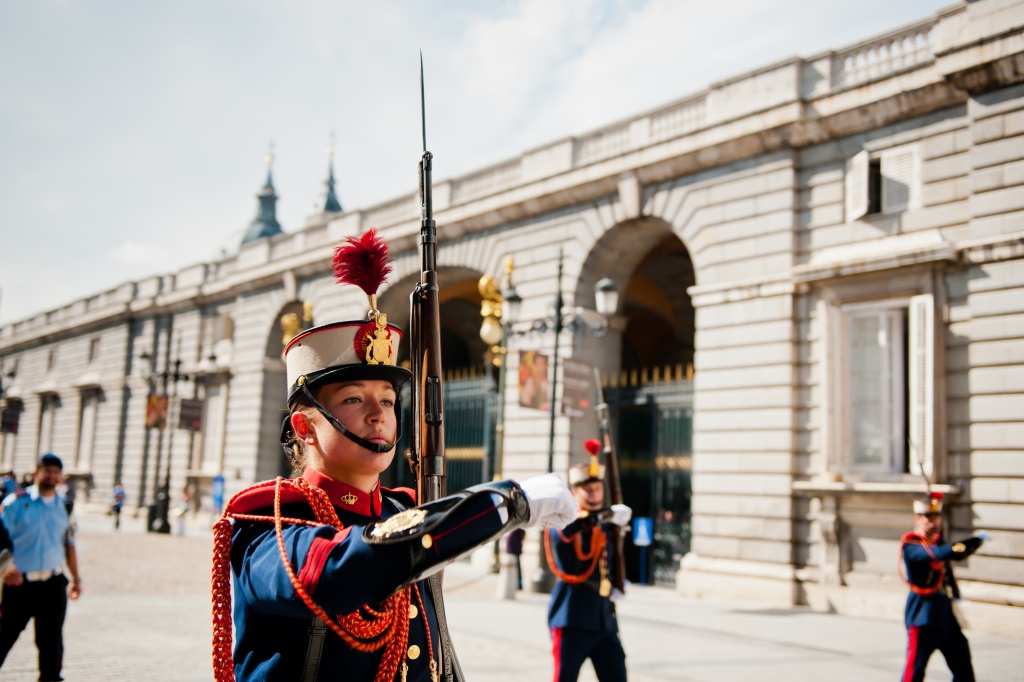 4. The epicentre of entertainment

Piccadilly Circus is a spectacle of lights and entertainment. Well-known for its luminous signs and for the Eros Fountain situated in the centre, this is one of those places in London that is full of people at any time of day.

It is London’s hub of entertainment, with numerous bars, restaurants, cinemas, theatres and shops to suit all tastes. If you are thinking of going, we recommend that you do so at night. It is a much more special time, when the lights of Piccadilly will dazzle you. 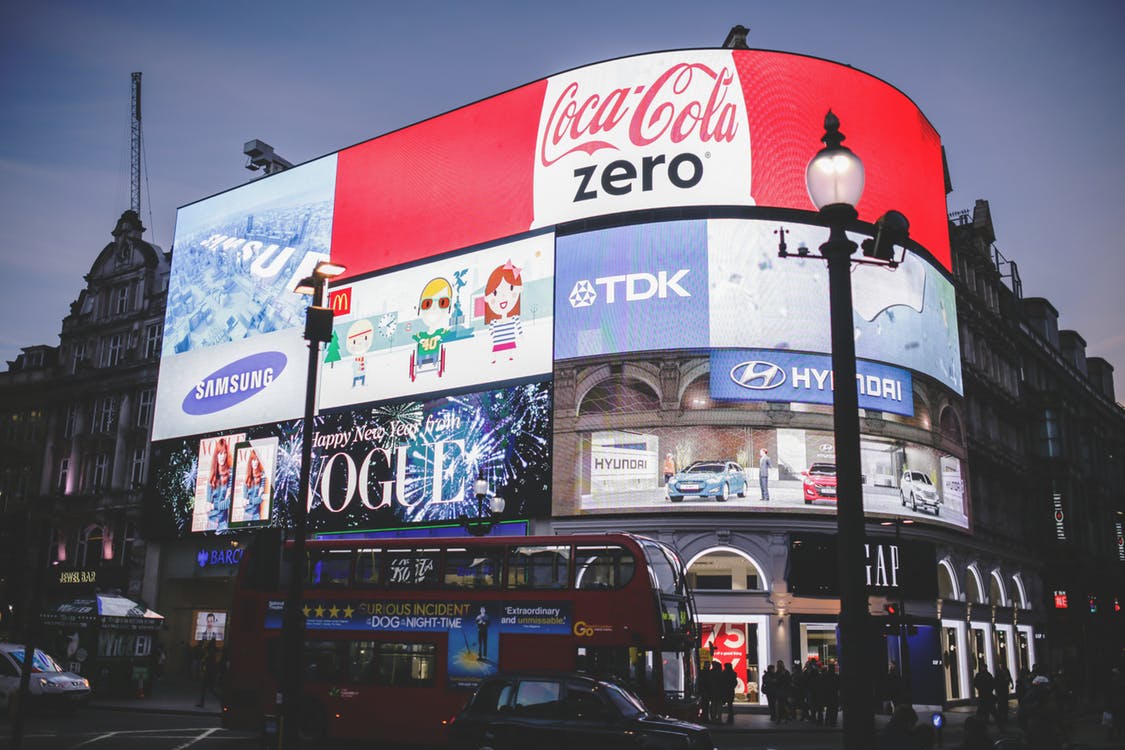 Lose yourself in the most picturesque neighbourhood and market in London. Camden Town, in the north of London, is one of the most famous districts in the city.

Its alternative character, the food stalls, the shops where you can find the unimaginable, the picturesque façades and its people of very differing styles, make this street market one of the most popular and different in London. 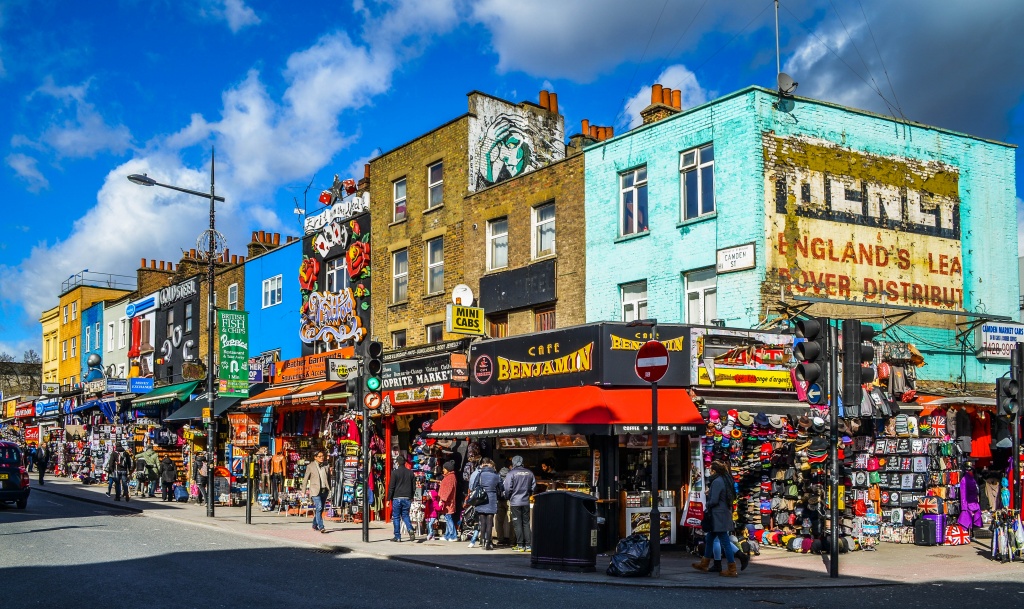 6. The most famous bridge

A photo taken on the most famous bridge in London is an absolute must. Tower Bridge is a bascule bridge that joins two parts of the city, separated by the River Thames. This bridge dates from 1894 and its construction lasted 8 years. It has also become one of the most popular sights in London.

It can be said that its incredible beauty makes this one of the most photographed places in London by visitors. 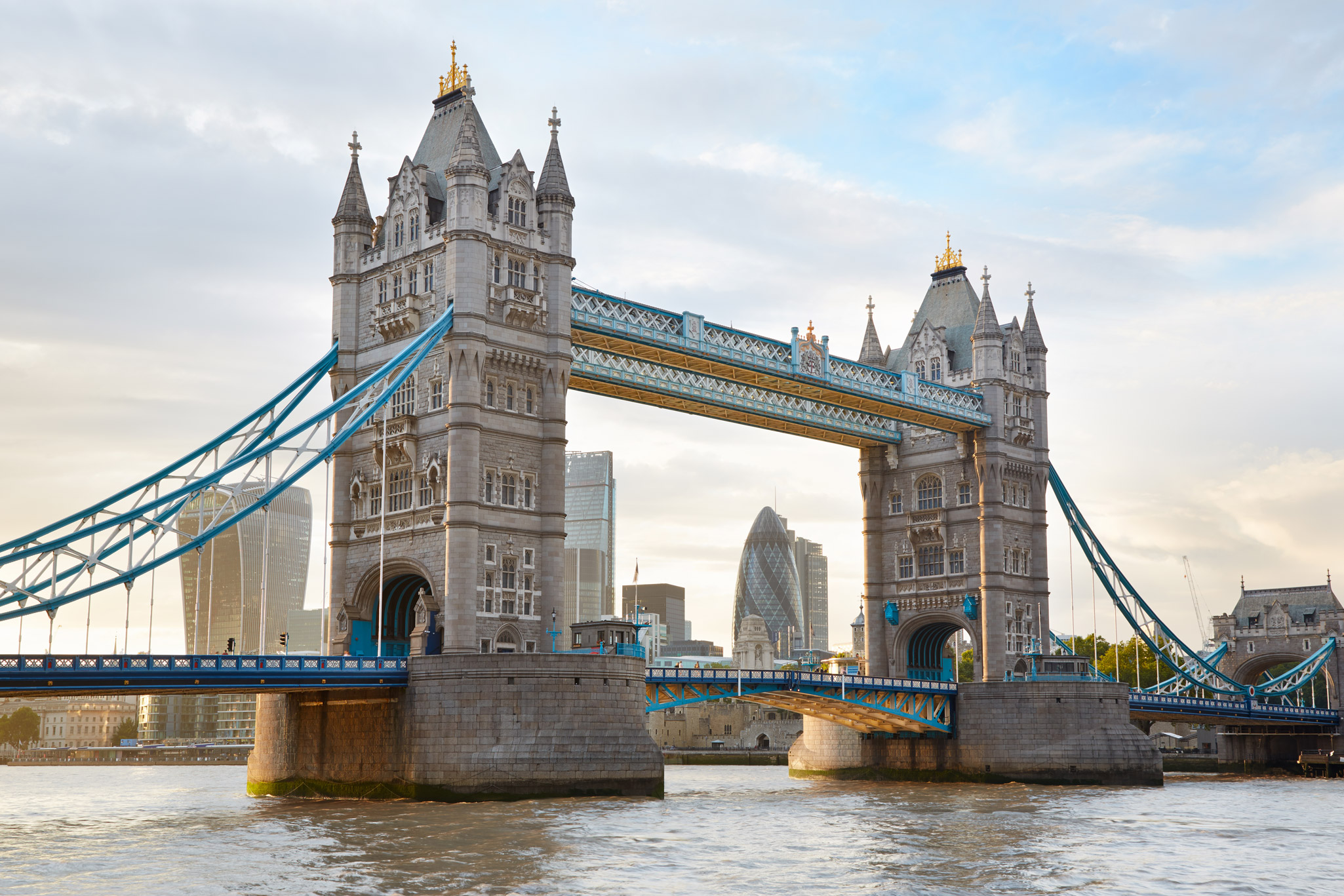 7. The heart of London

Presided over by the majestic 50-metre high Nelson’s Column, in Trafalgar Square there is always some event or celebration taking place and it’s always vibrant and busy.

Built in 1830 to commemorate the victory of the British Royal Navy at the Battle of Trafalgar, it is said that the four gigantic lions that surround the column were sculpted with bronze from the cannons of the defeated French fleet. The imposing fountains, brilliantly illuminated when night falls, stand in front of the entrance to London’s main art gallery, the National Gallery. 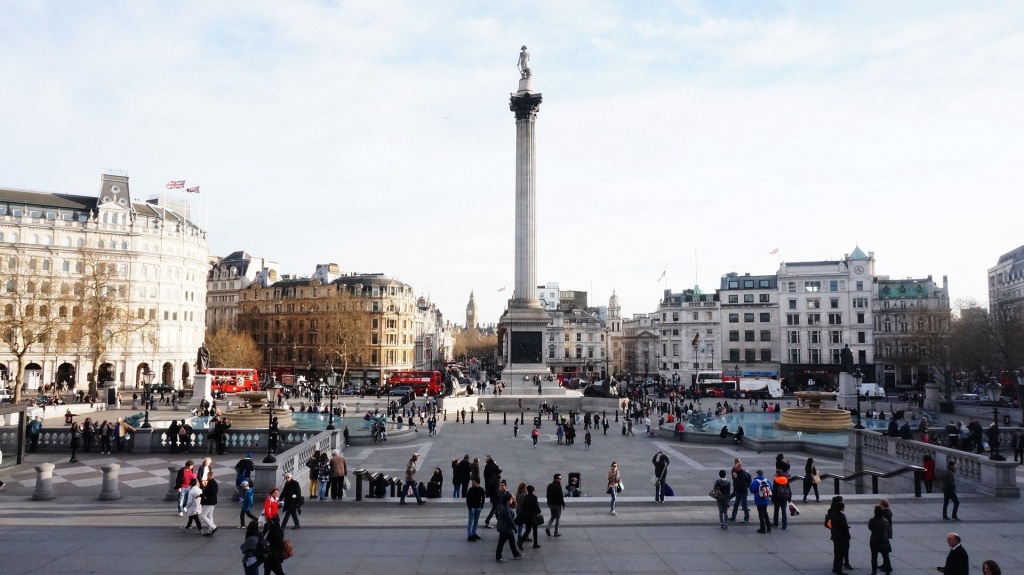 The Caesar Hotel is your perfect sanctuary if you want to visit London. This delightful 4-star boutique hotel is located only a few minutes from Hyde Park and Oxford Street’s shopping area.

It is a beautiful, recently refurbished Victorian-style building that will make your stay unforgettable. An oasis of tranquillity to disconnect from the hectic rhythm of the city. 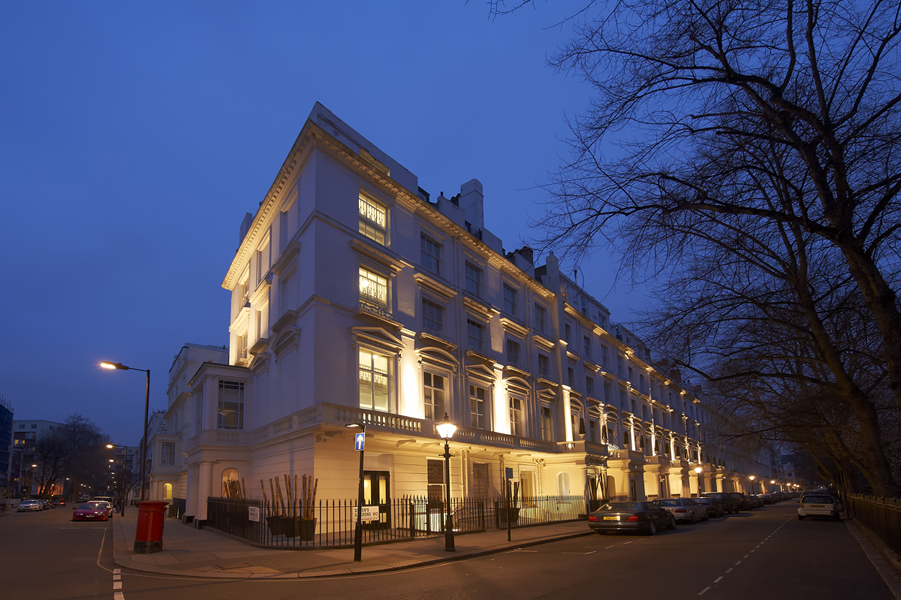 This is only a small sample of must-see sights in London, as there are countless other monuments, buildings, streets and places to see.  Come and discover London with us!